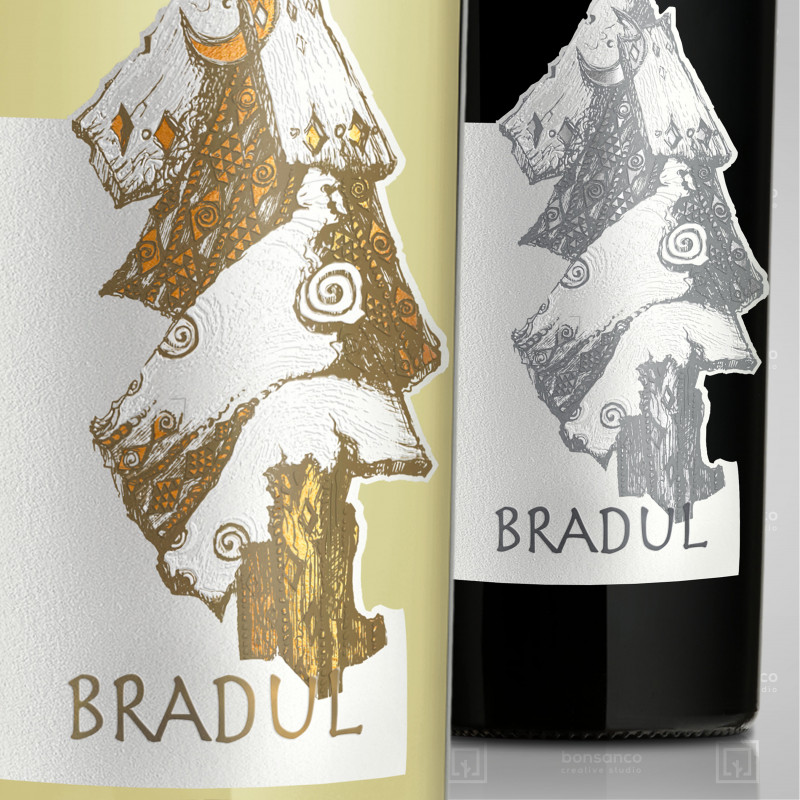 The BRADUL label is a tribute brought to one of the ancient traditional Romanian symbols that is abundant in plenty of deep meanings. BRADUL (the fir tree) is a Dacian word preserved unaltered in Romanian language, that in spiritual symbolism is considered a sacred tree, which makes the connection between earth and heaven and represents the upward course of life.

Essential attribute of the myth of the tree of life, of the cosmic tree; the beautiful, green and perennial fir, has inspired since ancient times the local people the faith in its vital force, choosing it as a symbol of eternal youth and life without death. He accompanied the most important events of life: the birth rites, when each new-born was given a fir tree, at the wedding and death rites, kept since the Dacians.

The motif of the fir tree is present in folk art throughout the centuries, carved on the magnificent gates, represented on the gables and plasters of the houses, on the dowry boxes, on the vessels and household objects, painted on the ceramic pots and jars, sewn on the traditional clothes, on the traditional shirts - placed on the chest and sleeves, embroidered with gold and silver thread.

Thus, we represented BRADUL - the fir tree on our label in an original graphic way and yet bearing the multimillenary imprint of its meanings; with a wooden texture, inlaid with ancient ornamental elements of gold or silver - precious metals, in the processing and forging of which, our Dacian ancestors were unmatched masters.

The twisted rope is associated with the aspirations of the human being, with the relentless thirst of the man thirsty for knowledge, with his desire to climb, to evolve, to overcome his limits, it’s like a ladder, that invites man to ascend in order to enjoy the universal consciousness. Seeming to be endless, it symbolizes the infinity, the uphill to the lands of heaven, the connection between earthly and celestial.

The rhombus is an emblem for fertility, the geometric symbol of the sun, of cyclicality, dynamism, divinity, eternity and balance; it is a reference to the Tree of Life because the rhombus is nothing but a mirrored illustration of the triangle -  the mark of the fir tree, making the connection between earthly life and the world beyond.

The spiral, the oldest attested symbol on our lands, on the ceramic objects from the Cucuteni culture, increases the depth of the message through its meanings as a symbol of the sun and of the Supreme Divinity, of dynamism, evolution and the journey to eternal life.

The new moon represents a turning point in life or a new beginning - the sister of the Sun in folk tales and legends, it becomes a witness to all the events of human life linked with the fir tree.

All the ancestral symbols and beliefs illustrated on the BRADUL label go hand in hand with the ancient vine cultivation and wine production, the main activity of the natives from thousands of years ago. The varieties of grapes like rara neagră and tămâioasă are some of the oldest on our lands.